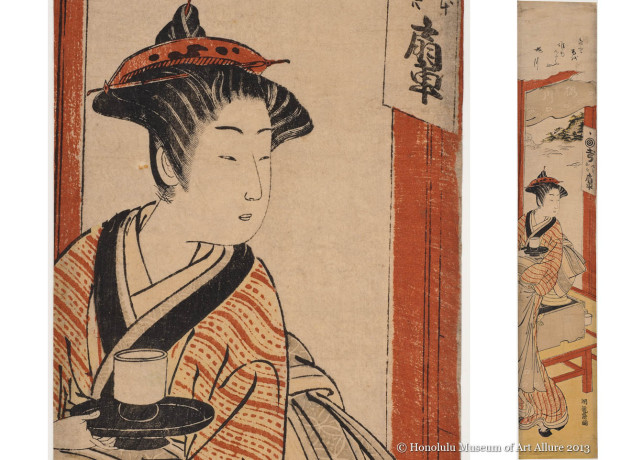 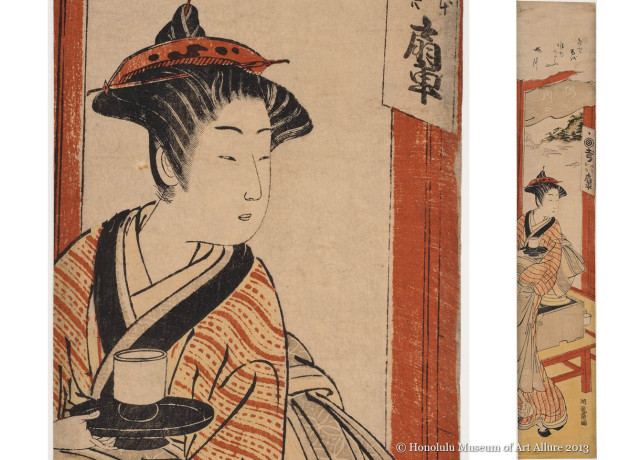 Everyone is attracted
To the color and scent
Of the Cherry Blossom River.

This print depicts a waitress of the Sakuragawa (literally “Cherry Blossom River”) teahouse, identified by the name printed on the curtain hanging from the doorway. The poem in the upper register plays on the name by associating the pleasures of the teahouse (and its waitress) with the fragrance of cherry blossoms by a riverbank.

Such less than subtle advertising was common in Japanese prints, and it is thought that in some cases artists or their publishers might have collaborated with various businesses, and perhaps even received incentives towards the production of the print. The bull’s-eye on the sign hanging on the doorpost further informs potential clients that Sakuragawa has its own archery range.

The name of the waitress has been lost to history, but presumably an audience at the time would have recognized her by her association with the Sakuragawa. Her coiffure is done in the tōrōbin (literally “lantern sideburn”) style, in which whalebone was used to raise the hair on either side. The tōrōbin was the height of fashion in the Meiwa (1764-1772) and An’ei (1772-1781) periods.