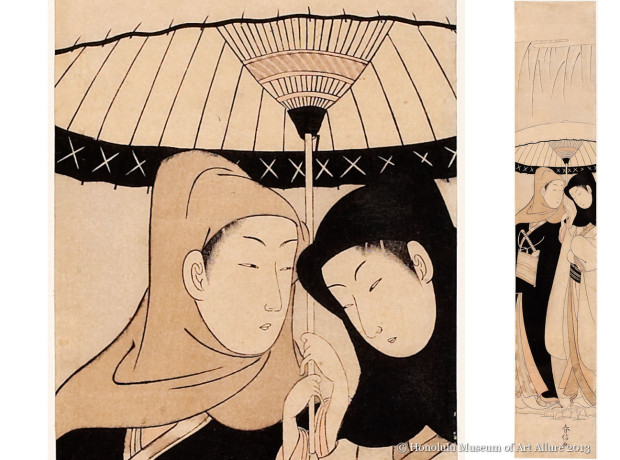 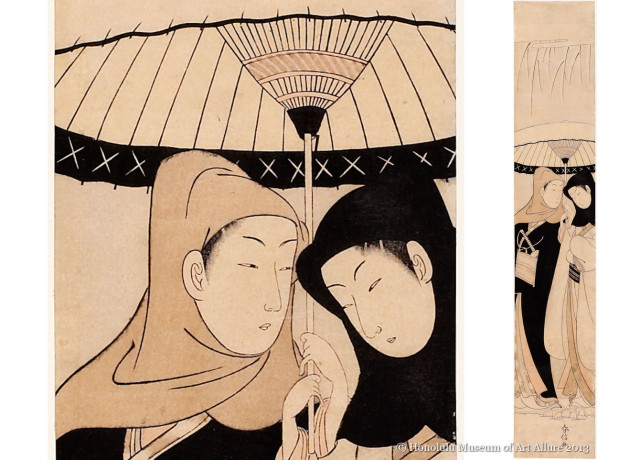 The existence of multiple variations on Harunobu’s chūban (half the standard size) print of lovers sharing an umbrella (see previous print) indicates its exceptional and enduring popularity (indeed, there has been a healthy debate as to which variations were done during Harunobu’s lifetime, from which the Honolulu impression has not been exempt). It is thought that it also inspired this later hashira-e or “pillar print” version, which some scholars have suggested might have been designed by Harunobu’s student Shiba Kōkan (1747-1818), signing it with the master’s name for greater marketability.

The combination of a man dressed in black and a woman in white often has been associated with  the traditional Japanese pairing of raven and heron, and further with the folk tale of the Heron Maiden. In this story, a young man rescues a wounded heron, and later meets a beautiful young woman whom he marries. The woman makes brocade silk (recalling the embossed pattern of the woman’s kimono in the chūban version) that brings the couple prosperity, but instructs her husband that he can never watch her while she is weaving. Of course, this compels the man to spy on her, whereupon she is revealed as the heron that he saved earlier, forcing her to leave him.