Home Autumn Wind, after the poem by Fujiwara no Toshiyuki,
Suzuki Harunobu (1725?-1770) 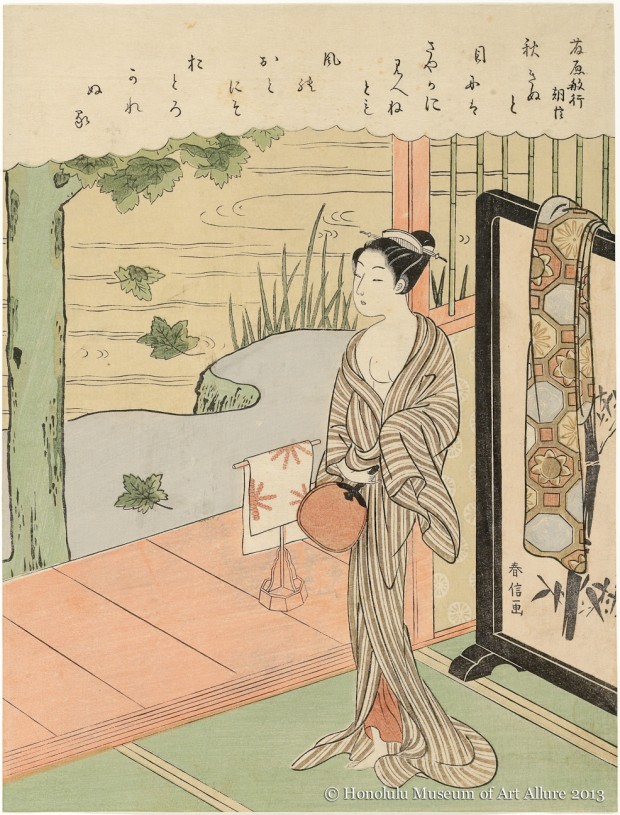 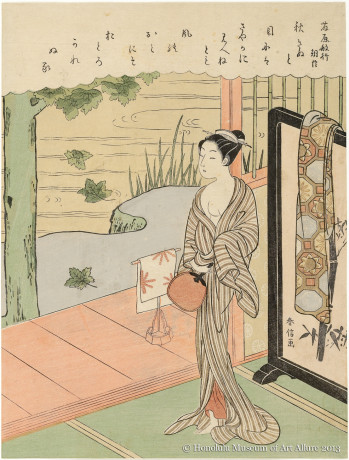 Harunobu often took inspiration from classical poetry, and the poem in the upper register here comes from the early 10th century imperial compilation Collected Ancient and Modern Japanese Poems (Kokin wakashū). It was written by Fujiwara no Toshiyuki (d. 901 or 907), one of the “36 Poetry Immortals” (sanjūrokkasen):

Nothing said too clearly to my eyes that fall had come,
Yet I was startled by the sound of autumn’s wind.

The antiquity of the poem instills the image with a nostalgia that is deepened by its intense awareness of fleeting time. However, instead of placing the scene within a historical context of the Heian period (794-1185) in which it was written, the artist has instead depicted a contemporary beauty embodying the most current fashions.

At the same time, her dress and hairstyle are of secondary importance to the concept of mono no aware (literally “sensitivity to things”), the poignancy that comes from the fact that all beauty ends, and yet becomes even more beautiful by its impermanence. Harunobu has projected this emotional state onto the passage of the seasons, as the woman gazes outside, the summer of her full beauty suddenly caught off guard by the first signs of autumn in the falling leaves.