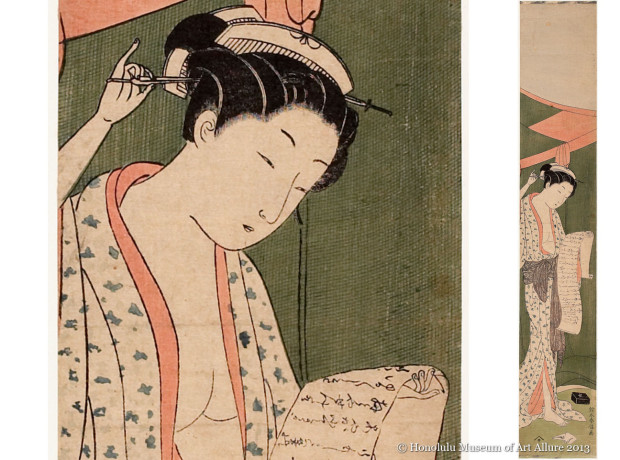 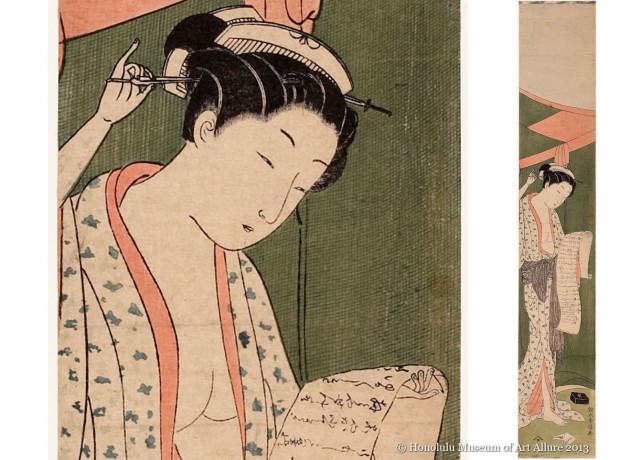 The 1760s saw a revolution in woodblock printing. Early in the decade, artists were still limited to printing in monochrome with hand-coloring, or at best the relatively primitive benizuri-e (literally “pink pictures”), which allowed for printing of two colors. However, as techniques like registration, allowing for the use of multiple blocks, improved, multi-color or “brocade” prints (nishiki-e) became possible, and Harunobu was the first artist to design nishiki-e, releasing the earliest examples in around 1765.

Harunobu was particularly sensitive in his palette, and while later prints continued to add increasing numbers of colors, in some ways nishiki-e reached its zenith with the first artist who introduced the technique. At the same time, Harunobu’s work also is characterized by careful attention to other innovative details of carving and printing, of which the exquisitely fine lines of the mosquito netting in the background are a superb example.

Both the mosquito netting and the woman’s light clothing indicate that the season is summer. Like the print by Toyonobu earlier in this exhibition, the “pillar picture” (hashira-e) format has been used to provide a voyeuristic glimpse of a woman in déshabillé as she prepares for bed, the outer wrapper of a love letter carelessly tossed to the floor as she thoughtfully reads its contents.