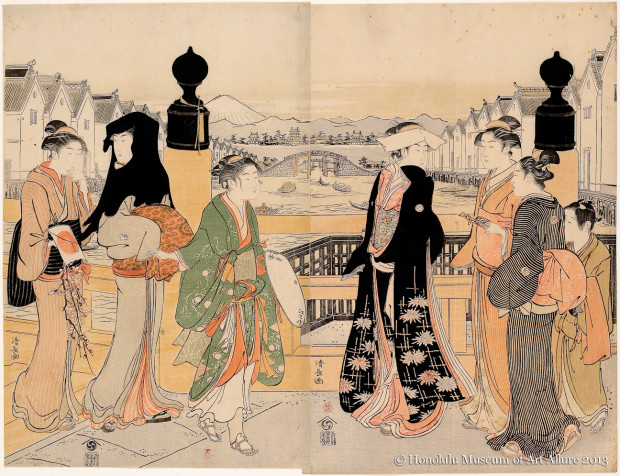 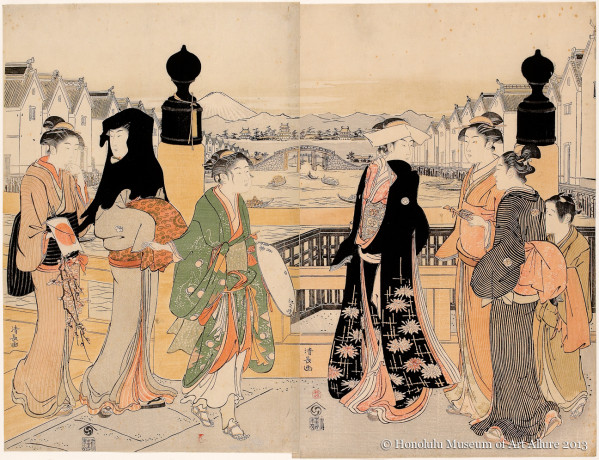 Nihonbashi, with its warehouses lining the banks of the river, was Edo’s crowded commercial district, and it offered a talented artist the opportunity to combine multiple elements into a complex scene. Typically, Kiyonaga expanded the composition over a diptych, providing an imposing scale appropriate to his stately, monumental figures. The artist here experimented with perspective (newly introduced through European books and engravings brought by Dutch trade missions), receding through the bridges spanning the river to the castle of the shogunate in the distance, and concluding with a vision of Mount Fuji in a crystalline New Year’s sky in the far distance.

Kiyonaga arranged the figures in the foreground in two pyramidal groupings, each occupying one sheet of the diptych. On the left, a young woman in a green kimono carries a hat indicating that she has returned from a pilgrimage to the shrine at Enoshima; behind her is a married woman with her maid, who bears a branch of plum blossoms and a kite with a red sun.

The married woman is contrasted in the right group by a young beauty from a wealthy merchant family dressed in her New Year’s finest, with the long-sleeved robe of an unmarried woman (furisode) in red, tied by an elaborate brocade obi, under a sumptuous black formal outer coat (uchikake).