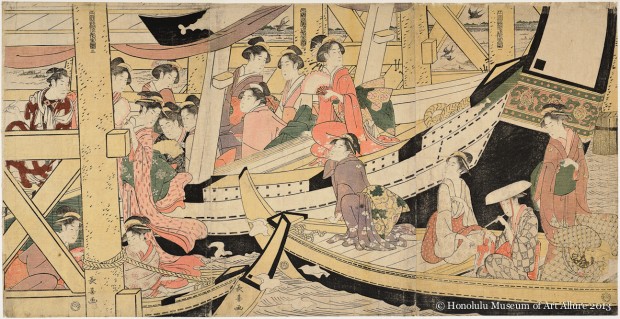 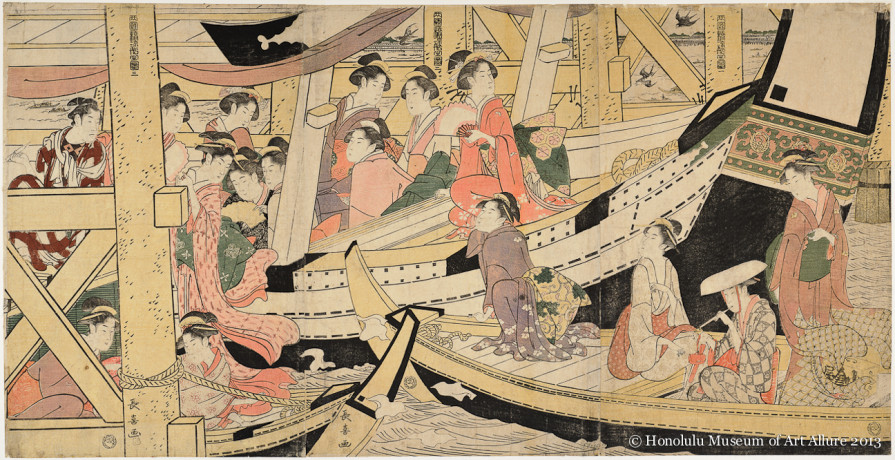 The Ryōgoku Bridge over the Sumida River was a popular area to escape the heat of summer, with numerous teahouses set up on either bank (see Harunobu’s Sixth Month earlier in this exhibition), and regular cruises sailing along the river every evening. Although most artists chose to depict it from a distance, Chōki here innovatively has shown a close-up of the bridge, allowing him to emphasize the activities of the patrons in three boats tied to its pilings.

The title is cleverly incorporated in elegant seal script carved into a post on each print, while the artist’s signature is also carved into the post on the left and the prow of a boat in the middle sheet, and the crane-shaped seal of the publisher, Tsuruya Kiemon, is further carved into the side of the boat on the far right, the prow of the same boat in the middle sheet, and the side of a second boat on the left.

Once Kiyonaga popularized compositions spread over two or more sheets, there was a trend towards increasingly complex settings through the end of the 18th century, which reaches a zenith in the present example. While clarity sometimes was sacrificed to a bewildering number of elements, it also allowed Chōki to present a wealth of details, an interesting one of which is the leather tobacco and pipe case of the woman wearing a hat seated on the right, just starting to enjoy a smoke.