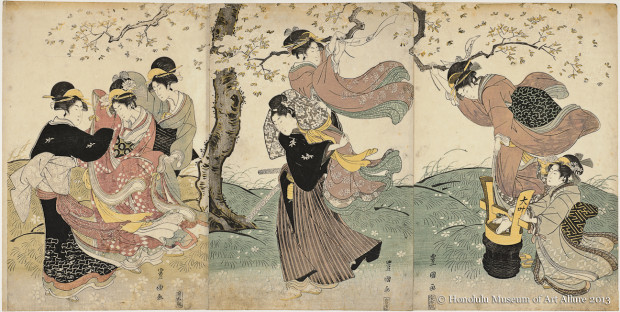 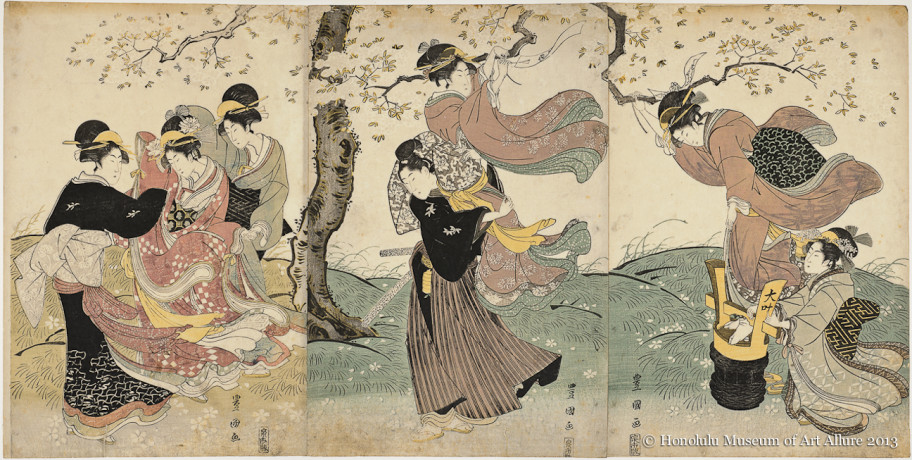 The late 18th century saw an important shift in the world of print design, as long-established schools like the Torii (of which Kiyonaga was the last major artist) and Katsukawa (specializing in Kabuki-related themes) began to decline, and a new school, the Utagawa, started its ascendency.

Toyokuni I was the leading artist of the second generation of the Utagawa School, and under his direction it came to dominate ukiyo-e. Toyokuni established a large studio that trained most of the major print designers of the 19th century, including Kunisada (who inherited his master’s name as Toyokuni III) and Kuniyoshi (ironically, the Utagawa artist best known to later generations, Hiroshige, was rejected by Toyokuni, and studied under one of his lesser contemporaries). Of surviving print designs from the Edo period, Utagawa School works comprise over half the total number, in no small part due to Toyokuni I’s success.

One of the most iconic spring activities in Japan was cherry blossom viewing, during which narrow strips of paper with poems (tanzaku) were traditionally tied to the branches of the trees. However, here an unexpected strong wind has disturbed the event, and both the women, dressed in the elegant long-sleeved furisode that identify them as unmarried, and the blossoms with which they are compared, struggle to maintain their composure.