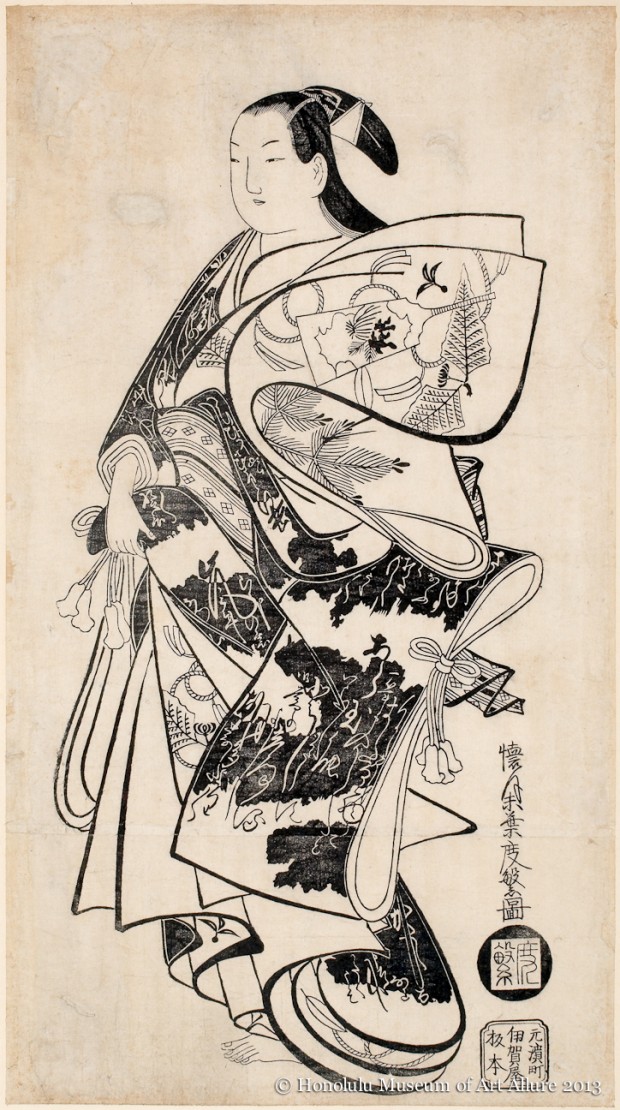 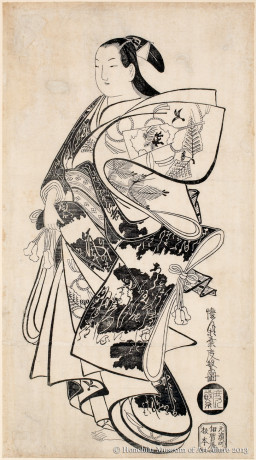 Although primarily a school of painters, the Kaigetsudō also was the first school to produce single-sheet depictions of bijin (“beauties”), and their stately, imposing subjects defined canons of beauty for the first part of the 18th century. The woman portrayed here is a tayū (太夫), the highest rank of courtesan at the time. The term tayū comes from an ancient Chinese designation for wives and mothers of high officials; while its use for courtesans might seem ironic from a contemporary standpoint, it is important to remember that many courtesans at the beginning of the Edo period were thought to have been from high-ranking families that were displaced during the political shift to the Tokugawa shogunate, and these social associations lingered well into the first part of the 18th century (by the 1760s, tayū had disappeared to be replaced by other titles).

The designs on the courtesan’s inner kimono, including a hagoita paddle and pine branches, indicate that she is celebrating the New Year. Although hagoita paddles were used to play a game resembling badminton called hanetsuki, in which a shuttlecock was batted back and forth, they were also decorated as symbols of the New Year. The kimono further incorporates New Year’s poems in cursive script into its design, providing a bold graphic element. Tayū relied on their patrons to provide them with their first outfit for the New Year, which was one of their most important opportunities to make a fashion statement. At the same time, these staggeringly expensive garments sometimes were cast aside after a single wearing, in an expression of the stylishly devil-may-care attitude towards monetary affairs that the general public associated with the fabled courtesans of the Yoshiwara.