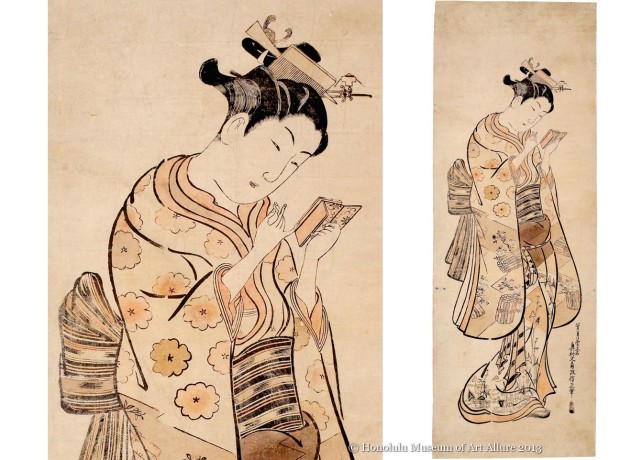 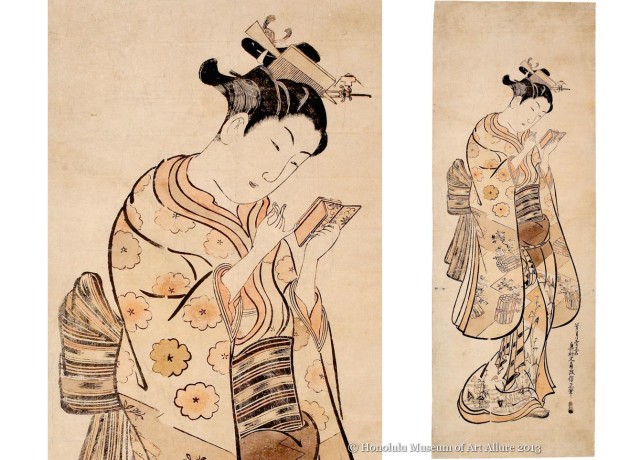 Masanobu was one of the most remarkable   ukiyo-e artists of the 18th century, and during a career spanning six decades, he achieved an unparalleled status as a leading innovator that culminated in a long period of artistic maturity during the 1740s-1750s, when this print was made. In addition to being a painter, print and book designer, he also wrote poetry and novels, often with his own illustrations.

Masanobu stands out from other (especially later) print designers in that he owned his own publishing company, which thrived producing single sheet prints like the present example. The long, narrow vertical format is characteristic of Masanobu’s novel designs, and established a precedent for the development of hashira-e or “pillar prints” (see the two examples by Toyonobu, who was influenced by Masanobu, earlier in this exhibition).

Typical of the time, Masanobu catches his subject in an unplanned moment as she applies rogue with the aid of a mirror while walking. The voyeuristic quality of the scene conveys the sense of inaccessibility that Yoshiwara courtesans consciously cultivated, called hari (often translated as “independent spirit”). Courtesans were expected to be aloof from their suitors, and to regularly refuse clients, making a captured glimpse of them all the more desirous.