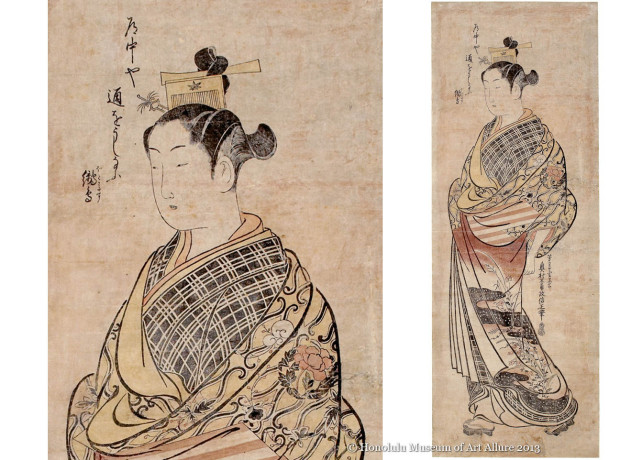 Masanobu’s success led to many imitators, and he went to some trouble to distinguish works published by his own company from copies made surreptitiously by other competitors; the signature of this print goes so far as to indicate that it is authentic (shōmei ), and is followed by the gourd- shaped seal used only by the artist. However, the print exists in three variations, with the other two both bearing the signature of the younger artist Toyonobu (ironically, one of Toyonobu’s designs might in fact be the earliest version).

The matter is further complicated by the fact that one of the Toyonobu prints depicts a Kabuki actor famous for female roles (onnagata), while it has been suggested that the peony crest on the shoulder of the present figure might identify her (him) as Agemaki, an onnagata role of a courtesan in the popular play Sukeroku. Although Kabuki was started by women, the overt eroticism of some early performances caused the government to ban female actors in 1629 (and later to ban adolescent boys, or wakashū, for the same reason). As a result, some iconic ukiyo-e images of beauties (including perhaps this one) in fact depict men performing female Kabuki roles. The text in the upper corner reads:

The cuckoo loses his power in mid-flight,
distracted by the beauty of a courtesan on parade.