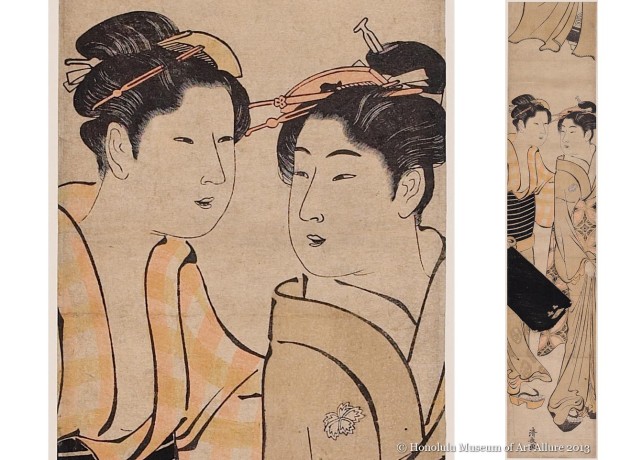 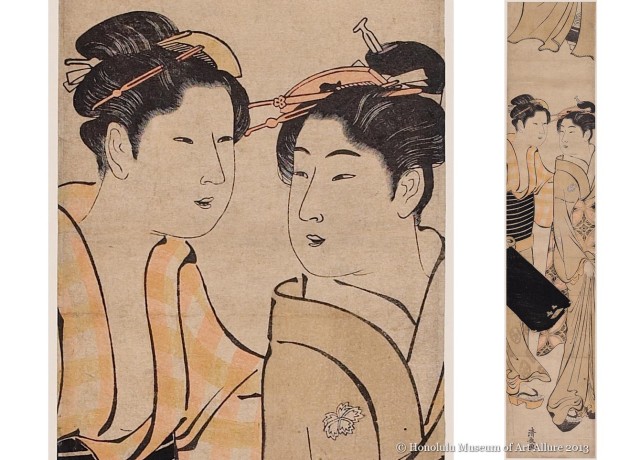 Early in his career, Kiyonaga was influenced by both Koryūsai and Shigemasa, and it is interesting in that regard to compare this print with the works by those two artists on display nearby. It is in the narrow, vertically-oriented “pillar print” (hashira-e) format favored by Koryūsai (and many other artists of the 1760s-1770s). The subject, a geisha on her way to an appointment, presumably to entertain a courtesan and her client, is similar to that of Shigemasa’s A Geisha on Her Way to Work, with essentially the same compositional elements. However, fashions already had started to change by the early 1780s, and the tōrōbin hairstyle so prevalent in Koryūsai’s and Shigemasa’s prints from the 1770s is changing to a less dramatic variation.

More importantly, though, we can begin to see the emergence of Kiyonaga’s own unique style, which would characterize his mature period in the 1780s, culminating with his appointment as the head of the long-established Torii School of print designers in 1785. The figures have a more substantial physique, evident in their rounded, fleshy faces, and their bodies are elongated to give them a more mature, imposing presence. In addition, the artist uses a more vigorous line, noticeable particularly in the undulations delineating their robes.