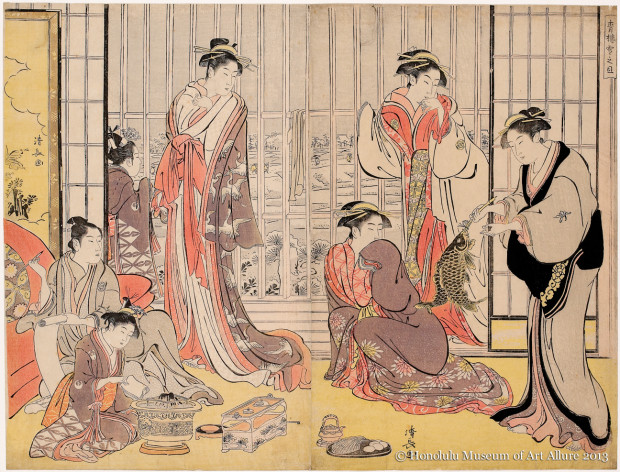 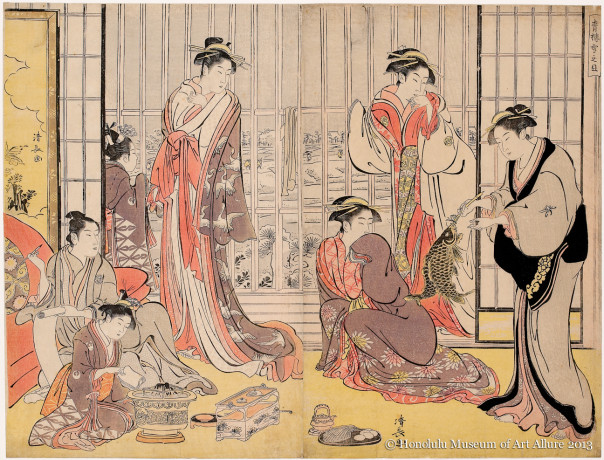 While the composition of this impressive diptych reveals Kiyonaga’s mastery of complex figural arrangements in detailed settings, the subject is mundane, a winter morning in a Yoshiwara brothel after an evening entertaining clients. The brothels were arranged according to a complex hierarchy, to which women submitted from the time they were recruited as girls (kamuro, literally “short-haired”) at the age of around five or six. Two kamuro are in attendance here: one fans the coals of a brazier to heat the room, while the other steals a glance outside the barred window. Three courtesans occupy the center; from the presence of kamuro, we can assume that at least one of them is of high rank, a chūsan (the kamuro’s robes are decorated with a crane-shaped crest, possibly associating them with the courtesan on the left). The courtesans wear their outer robes (uchikake) in order to stay warm. A young man, presumably a client who stayed the night, leans against folded bedding (an important part of a courtesan’s possessions often provided by a regular patron) while writing a letter.

However, the entire scene has been stolen by the matron ( the yarite, responsible for managing the courtesans’ affairs and training kamuro), who has disturbed an otherwise peaceful moment by bursting into the room with two live carp, to everyone’s startled amusement.