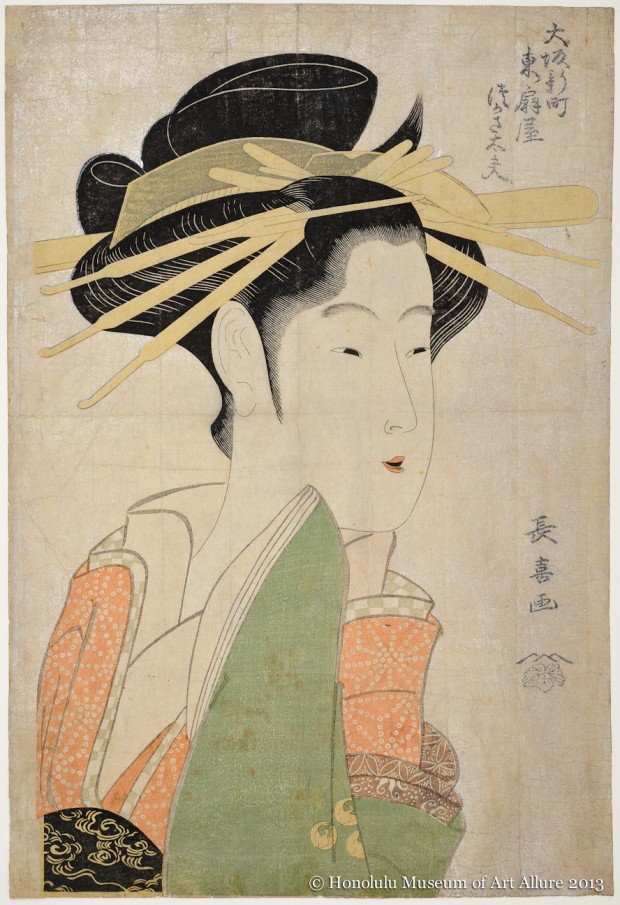 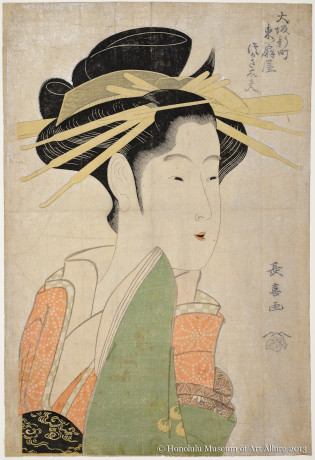 Not only is Chōki thought to have studied under the same painting teacher as Utamaro, but this print also was produced by one of Utamaro’s primary publishers, Kōshodō. By this time, the founder of Kōshodō, Tsutaya Jūzaburō, had passed away after (and perhaps in part due to) many legal troubles, and the firm was already in decline, but the present work still reveals the exceptional quality with which it was associated, with finely detailed carving, a harmoniously balanced palette and a luxurious mica background.

Chōki’s depiction of Tsukasa is done in the bust portrait (ōkubi-e) format popularized by Utamaro, and further incorporates several elements of his characteristic style (as seen, for example, in the two prints from Utamaro’s series A Comparison of Courtesan Flowers in this exhibition). On the other hand, the predominant arrangement of the composition according to ovals is more reminiscent of Eishi and his students. At the same time, Chōki was far from a derivative artist, and the present work, which James Michener likened to Modigliani, is one of the finest prints from the full flowering of ukiyo-e during the late 18th-early 19th century in the HMA’s collection.

The Yoshiwara was not the only licensed pleasure quarter in Japan; both Shimabara in Kyoto and Shinmachi in Osaka made their own unique contributions to the popular culture of the Edo period (as well as a number of smaller licensed quarters in other towns, and the many unlicensed quarters that were rife throughout the country). The title in the upper right identifies Tsukasa with a brothel in Osaka; interestingly, she is referred to as a tayū (see Kaigetsudō Dohan’s print earlier in this exhibition), a title for courtesans that had fallen out of use in the Yoshiwara nearly forty years earlier.