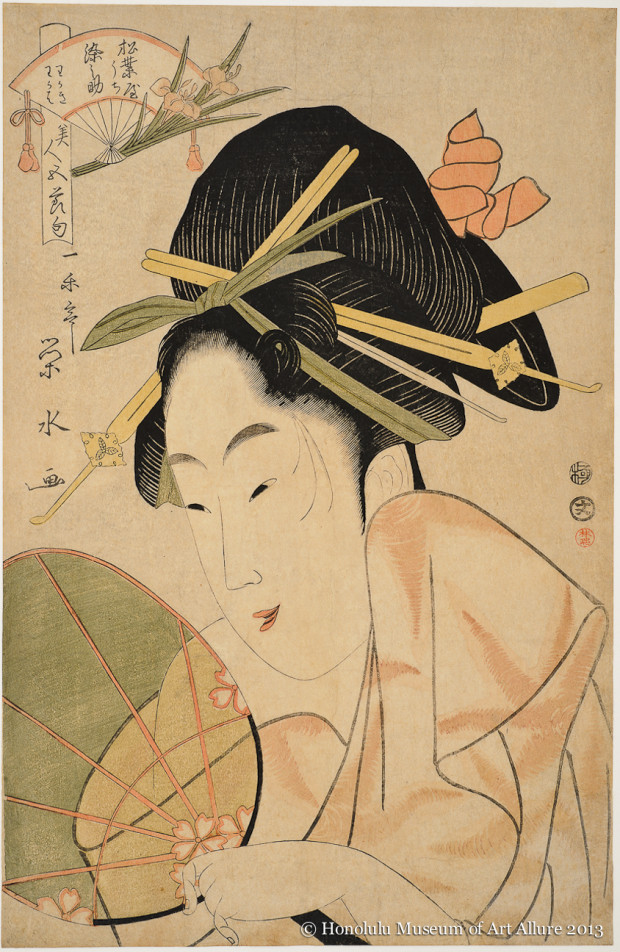 This print dates to around the same time as the depiction of Somenosuke by Eisui’s teacher Eishi, and has the same subject. Eishi’s influence can be seen in the geometric arrangement of the compositional elements into a number of tilted ovals, introducing a strong sense of dynamic instability. At the same time, the popularization of bust portraits (ōkubi-e) by Eishi’s main competitor, Utamaro, already had transformed the market for images of beauties, and Eisui not only follows this format, but also imitates Utamaro’s broad planes and contrast of finely carved lines for the details of face and hair against sweeping undulations for the outline of the robe (compare, for example, with the two prints from Utamaro’s series A Comparison of Courtesan Flowers earlier in this exhibition). Somenosuke’s robe slips to reveal her right shoulder, charging the design with voyeuristic eroticism, which is only heightened by the transparent fan behind which she is partially hidden.

Following a typical convention for the time, Somenosuke’s high status is emphasized by including in the fan cartouche at the upper left the names of her two kamuro attendants, Wakahi and Wakaha (in the same way that kamuro were dressed in matching outfits, they also often had matching names), even though they are not portrayed.