Home Okita and Ohisa in a Tug-of-war with a Sash Looped Round Their Necks, Kitagawa Utamaro (1753-1806)

Okita and Ohisa in a Tug-of-war with a Sash Looped Round Their Necks, Kitagawa Utamaro (1753-1806) 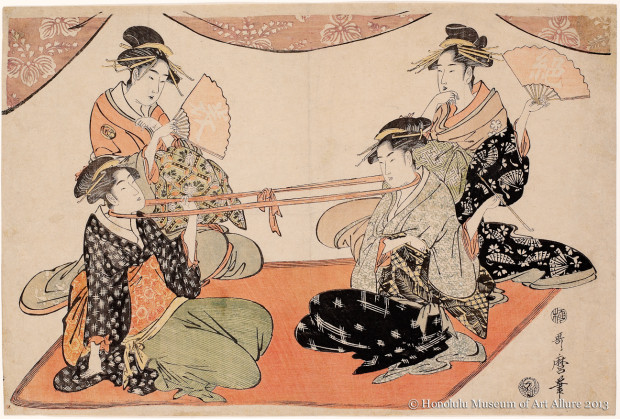 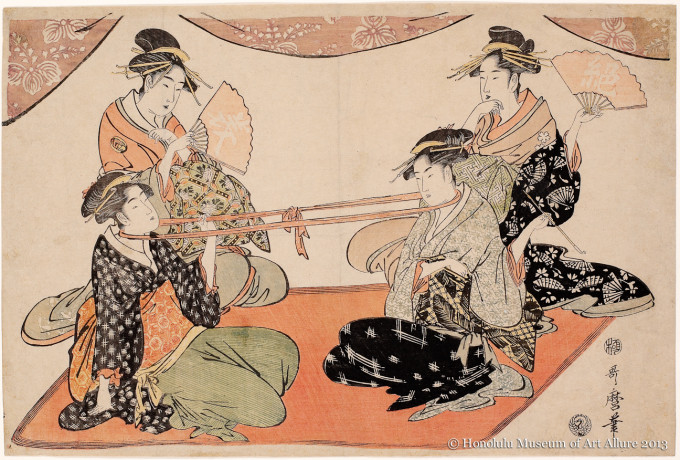 Continuing a practice already well-established by Harunobu and his followers, and reflected in several prints already seen in this exhibition, Utamaro elevated not only the courtesans of the Yoshiwara (with which he was intimately familiar) as icons of beauty, but also teahouse waitresses, whom he immortalized in several of his most memorable designs. Of the three most renowned beauties of the Kansei period (1789-1801), none were courtesans: both Okita and Ohisa worked in teahouses, while Tomimoto Toyohina was a musician (see the print depicting Toyohina also in this section).

Here the artist has provided a humorously literal interpretation of the rivalry between Okita and Ohisa, who are engaged in a contest of strength with a sash tied around their necks. Lest the viewer understand the scene too literally, the fans carried by the two courtesans who serve as judges read zetsu (“utmost”) and bi (“beauty”).

The outfits of both competitors feature kasuri fabric with a design woven in weft ikat, also seen in Utamaro’s Two Beauties from a few years later. In the heat of the struggle, both women have swept aside the lower part of their outer robes in order to move more freely, offering a view of their undergarments.