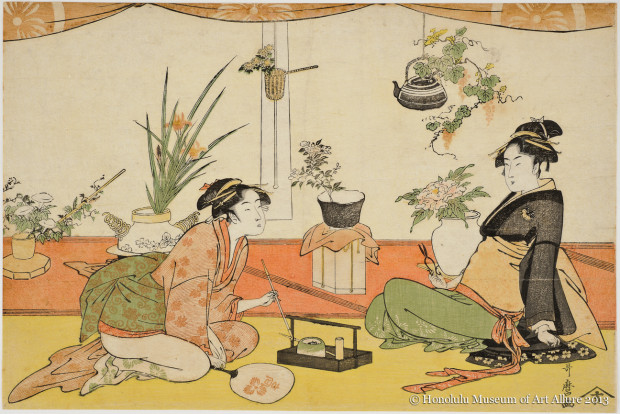 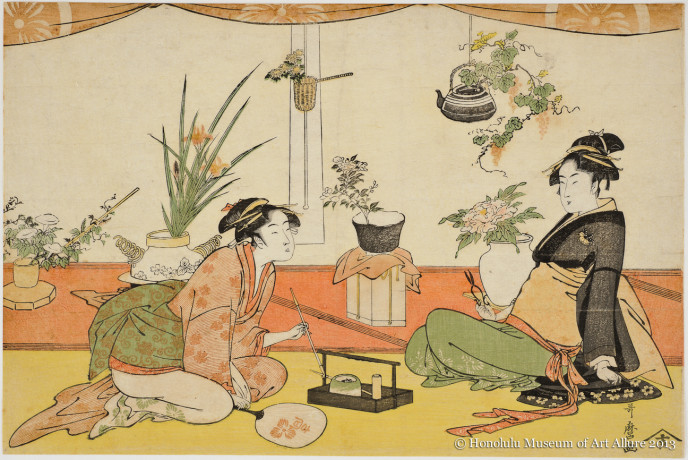 From around the same time as Utamaro’s print of Okita and Ohisa in a tug-of-war on display nearby, this composition similarly expresses the famous rivalry between the two women in literal terms, this time as an ikebana flower-arranging contest. Okita worked at the Naniwaya teahouse in Asakusa (near the Yoshiwara), while Ohisa worked for her family’s Takashimaya teahouse in the Ryōgoku district of Edo, a popular recreation area. In 1793-1794, when Utamaro did the majority of his depictions of them, Ohisa was about 17 years old, and Okita one year younger.

From the Takashimaya crest on the fan in the lower register, we can identify the left figure as Ohisa (a comparison with the faces in the tug-of-war scene also reveals the left figure in that print to be Ohisa). The writing on the fan was printed with a fugitive blue dye, and like the irises behind Ohisa and the grapes hanging from the kettle above Okita, it has turned brown from exposure.

The women are captured during a break in the competition, as Okita leans back with a pair of pruning shears in her hand, while Ohisa leans forward to prepare a pipe of tobacco. As in the tug-of-war print, a voyeuristic appeal has been added by the casual display of both women’s undergarments as they brush their lower outer kimono aside for greater freedom of movement.