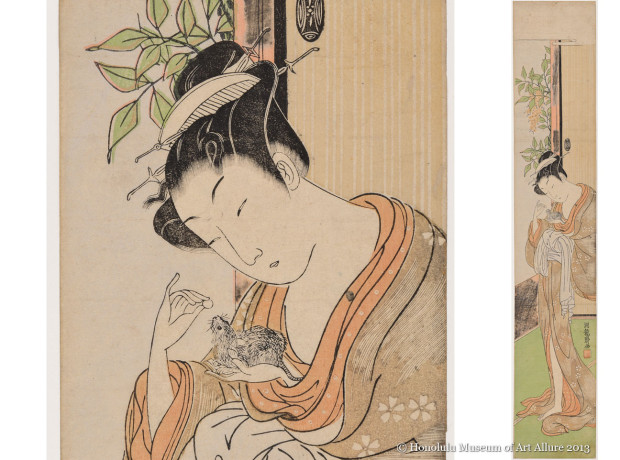 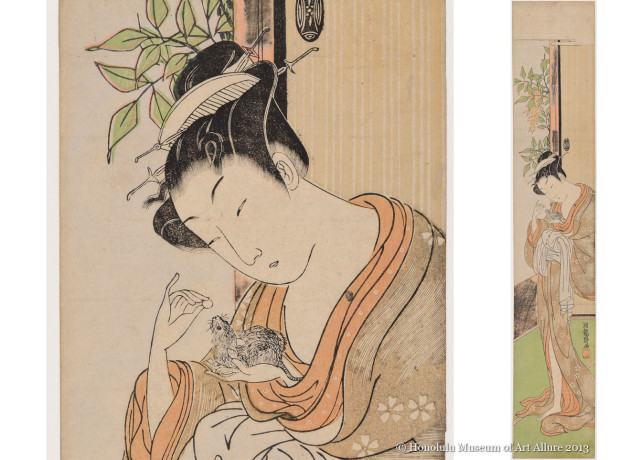 This print differs from the immediately preceding examples by Dohan and Masanobu not only in its use of full-color, or “brocade” printing (nishiki-e), but also in its idealization of delicate youthfulness. Both nishiki-e and this novel conception of beauty were introduced in the 1760s by Harunobu, whose adolescent figures might have been inspired by continental styles popular in China during the 18th century.

While it remains uncertain as to whether Koryūsai (who early in his career used the name Haruhiro, perhaps indicating an affiliation with Harunobu) was a direct student of the older master, he clearly was Harunobu’s artistic inheritor, and continued to elaborate upon these new innovations in the decade following Harunobu’s death, eventually developing his own distinctive style (see the following two prints).

The rat in the subject’s hand might seem like an unusual choice of pet, but it probably carries a specific calendrical association. Most print designers of the time had a lucrative business in making egoyomi or “calendar prints,” privately commissioned New Year’s gifts that indicated the long and short months for the coming lunar year. The rat was one of the twelve zodiacal animals used to indicate the year; in this case, the appropriate year of the rat would have been 1768, identifying this as an early work by the artist.