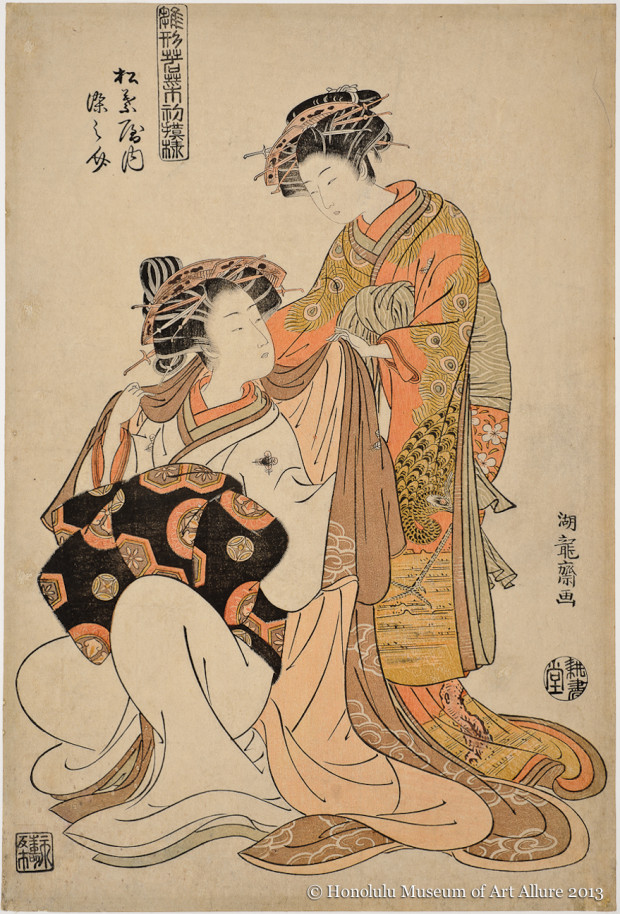 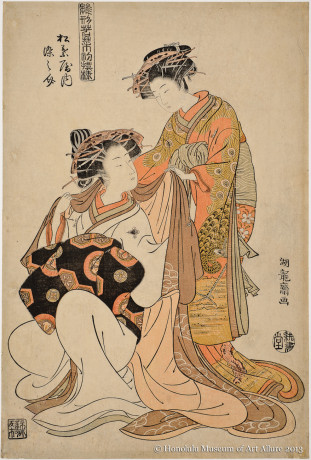 Isoda Koryūsai (1735-1790)
Somenosuke of the Matsubaya Brothel,
from the series Models for Fashion: New Designs as Fresh as Young Leaves
Japan, Edo period, c. 1778
Woodblock print; ink and color on paper
Gift of James A. Michener, 1973
Honolulu Museum of Art
(16400)

Over time, famous courtesans from the major brothels developed into lineages (myōseki ), with their names inherited from one generation to the next. From later depictions of Somenosuke (see Eishi’s print of Somenosuke on display elsewhere in this exhibition), we know that this name was a prominent lineage. The Somenosuke of the 1770s was a favored subject of Koryūsai’s, with three different portrayals of her by the artist in the HMA’s collection.

Most courtesans entered the Yoshiwara as young girls, or kamuro; when they reached their early teens promising kamuro became apprentices, or shinzō (literally “newly made”) to established courtesans. The attendant assisting Somenosuke with her formal outer robe (uchikake) presumably would be her shinzō; these young beauties presented some danger of competition to their mentors, and it is interesting that Koryūsai here has drawn special attention to her by giving her a considerably more decorative robe than the main subject, with an elaborate peacock design, the tail of which extends all the way to her shoulders. Both women have their hair done in the tōrōbin (“lantern sideburn”) style fashionable at the time, in which whalebone was used to extend the hair on either side.