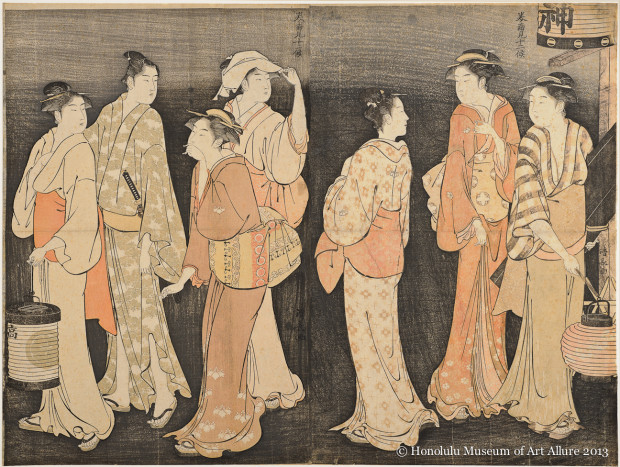 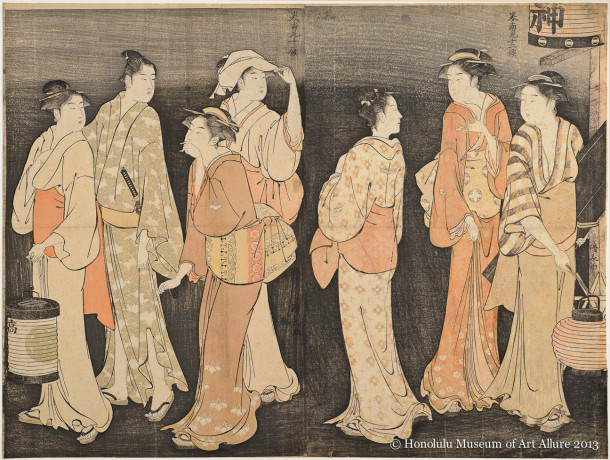 This magnificent diptych often is considered to mark Kiyonaga’s zenith. Atypically, the artist has eliminated background elements (aside from a gate identifying Kaiunji Temple, which enshrines the hearth deity Sentai Kōjin) in favor of beautifully printed gradations of dark gray to provide a night setting. This focuses the viewer’s attention entirely on the figures. Building on the compositional techniques of Koryūsai (whose series Models for Fashion Kiyonaga concluded around the same time), the subjects are portrayed in carefully arranged poses, organized into stable, pyramidal groupings. Unlike Koryūsai, though, there is a considerably greater sense of interaction between them, from which much of the interest of the design derives.

A courtesan and her attendants (on the left) escort a handsome young client after his appointment. However, his attention has been drawn to another courtesan on the right, resulting in a dramatic tension, the intense emotions of which are conveyed through various gazes and facial expressions with great subtlety. The “south” of the title refers to the unlicensed brothel district of Shinagawa, explaining why the courtesans have their obi tied in back, unlike the courtesans of the Yoshiwara, whose status as prostitutes was indicated by tying their obi in the front.