Home Segawa of the Matsubaya Brothel, with the Kamuro Sasano and Takeno, Torii Kiyonaga (1752-1815)

Segawa of the Matsubaya Brothel, with the Kamuro Sasano and Takeno, Torii Kiyonaga (1752-1815) 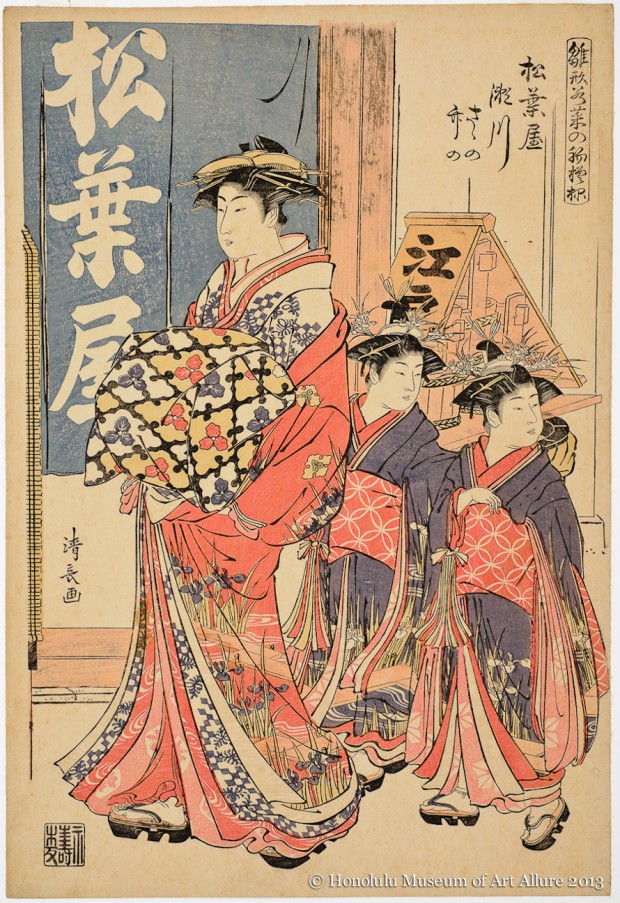 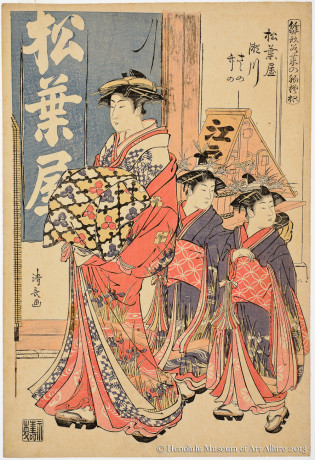 Torii Kiyonaga (1752-1815)
Segawa of the Matsubaya Brothel, with the Kamuro Sasano and Takeno,
from the series Models for Fashion: New Designs as Fresh as Young Leaves
Japan, Edo period, 1782
Woodblock print; ink and color on paper
Gift of James A. Michener, 1957
Honolulu Museum of Art
(13824)

Models for Fashion was one of the most successful series of prints produced during the late 18th century. It included over one hundred designs by Koryūsai, with an additional ten designs contributed by Kiyonaga, of which this is thought to be the earliest. While Kiyonaga’s designs follow the same basic format as Koryūsai’s, the artist already was well-established by the time he started working on this series, and a comparison with Koryūsai’s depictions of Michinoku and Somenosuke in this exhibition reveals elements of Kiyonaga’s distinctive personal style, for example in the treatment of the faces and the complexity of the background elements.

Segawa was the most successful lineage of courtesans in the eminent Matsubaya brothel, with as many as nine different women holding the name (this is probably Segawa VI). She and her kamuro wear robes with matching designs of an eight-planked bridge over a marsh of irises; this is a classical reference to a poem in the Heian period (794-1185) Tales of Ise (ironically, the poem is about a courtier banished from the capital, longing for his wife’s familiar company).