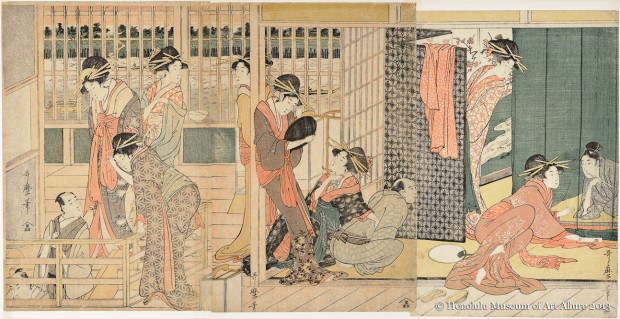 In a city already prone to fires due to its predominantly wooden architecture, the Yoshiwara suffered frequent devastating conflagrations. The Yoshiwara was exempt from participating in the city’s fire brigades, and in turn those brigades supposedly refused to respond to its calls for aid, so that the entire quarter was destroyed on a regular basis. During these times, the government allowed brothels to establish “temporary lodgings” in various parts of the city; in this case, the Sumida River, with Mimeguri Shrine on Mukōjima (already encountered in Kiyonaga’s A Sudden Squall at Mimeguri Shrine earlier in this exhibition), is visible in the background. While residing in the temporary lodgings, many of the Yoshiwara’s restrictions on the behavior of courtesans were relaxed, and the atmosphere is decidedly informal in this morning scene.

Each sheet shows courtesans interacting with their clients who have spent the evening: on the right, a man chats with his paramour through mosquito netting; in the middle, another man spies on them (or perhaps on the woman dressing behind a screen) while his female companion leans on his back, with her hand inside his robe in a familiar gesture; and on the left, two men are bid farewell. An interesting genre detail is the toothbrush and mouth-rinsing bowl on the windowsill.