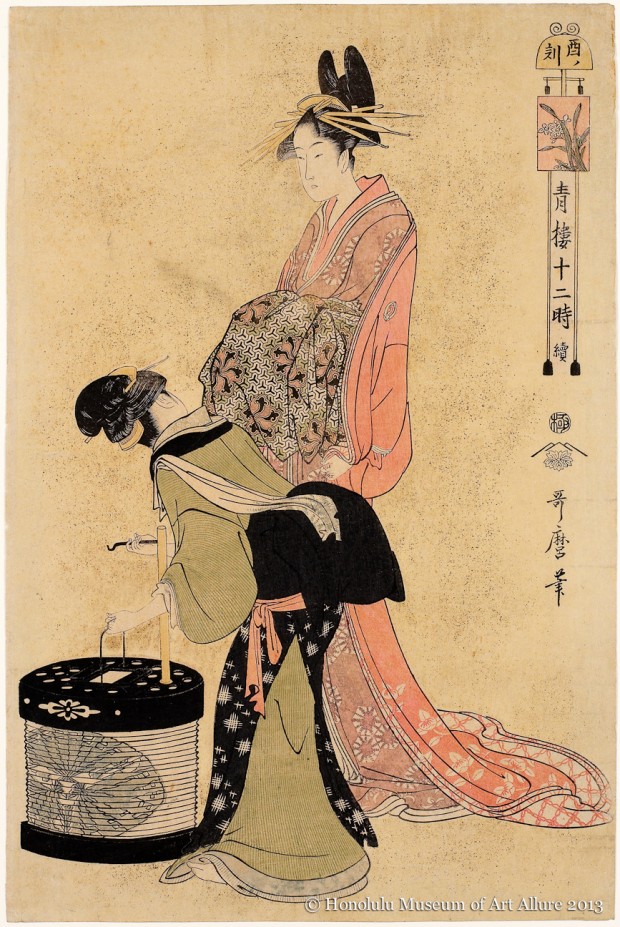 This and the following print were produced by Tsutaya Jūzaburō, who we also have encountered as the publisher of the Yoshiwara saiken. Tsutaya was a leading figure in the culture of the Yoshiwara (and publisher of many significant authors of fiction, as well as print designers). Utamaro lived for a time in Tsutaya’s residence, and equal credit must be given to both designer and publisher for some of the most iconic images of ukiyo-e produced during the late 18th century. Tsutaya was known not only for the exceptionally high quality of his printing, but also for luxury editions using expensive materials, an example of which is the sprinkling of gold dust blown through a pipe to provide a literal atmosphere of extravagance around the subject. In some ways this flaunted the prevailing conservatism of the time (the infamous Kansei reforms of the early 1790s were still a recent memory); both Tsutaya and Utamaro experienced government censorship and imprisonment during their careers, with severe consequences.

The hour of the cock corresponded to the early evening (6-8 p.m.), and appropriately, a courtesan is shown on her way to a house of assignation (ageya) to meet with her first client for the evening, accompanied by an attendant with a lantern.