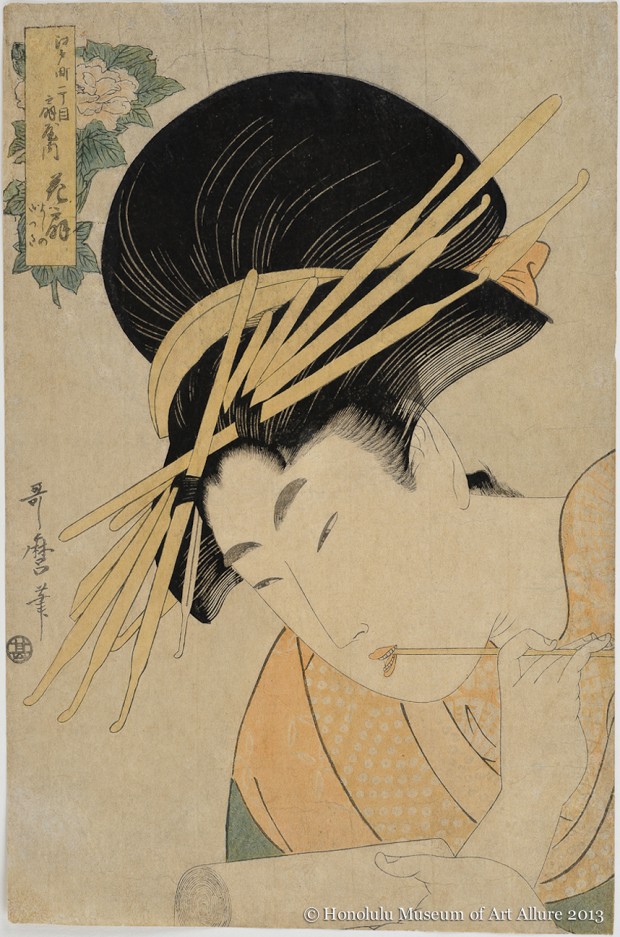 Kitagawa Utamaro (1753-1806)
Hanaōgi of the Ōgiya Brothel at Edochō Itchōme, from the series A Comparison of Courtesan Flowers
Japan, Edo period, 1801
Woodblock print; ink and color on paper
Gift of James A. Michener, 1991
Honolulu Museum of Art
(24515)

Located in a coveted part of the Yoshiwara, the Ōgiya was one of the quarter’s most prestigious brothels, in no small part due its lineage of courtesans bearing the name Hanaōgi (literally meaning “Blossom Fan”). The women with this name were renowned for their artistic talent and cultural sophistication, and it comes as no surprise that they were a popular subject for ukiyo-e artists for more than two decades, from the 1780s to the early 19th century.

The legend of Hanaōgi extended into modern times through James Michener (the donor of this print), in whose novel Sayonara she served as one of the main characters, ultimately resulting in an Academy Award-winning 1957 movie. Michener said of her (referring specifically to this print), “She can be called the patron saint of my collection, except that the word ‘saint’ is hardly one that applies to this remarkable woman.”

The Hanaōgi lineage lasted well into the 19th century, with the final Ōgiya courtesan of that name active as late as the 1840s. However, reflecting a larger decline for the Yoshiwara in general, after this the name was sold to a lesser brothel, and the Ōgiya fell on such hard times that the last owner was forced to sell his own daughter into prostitution.