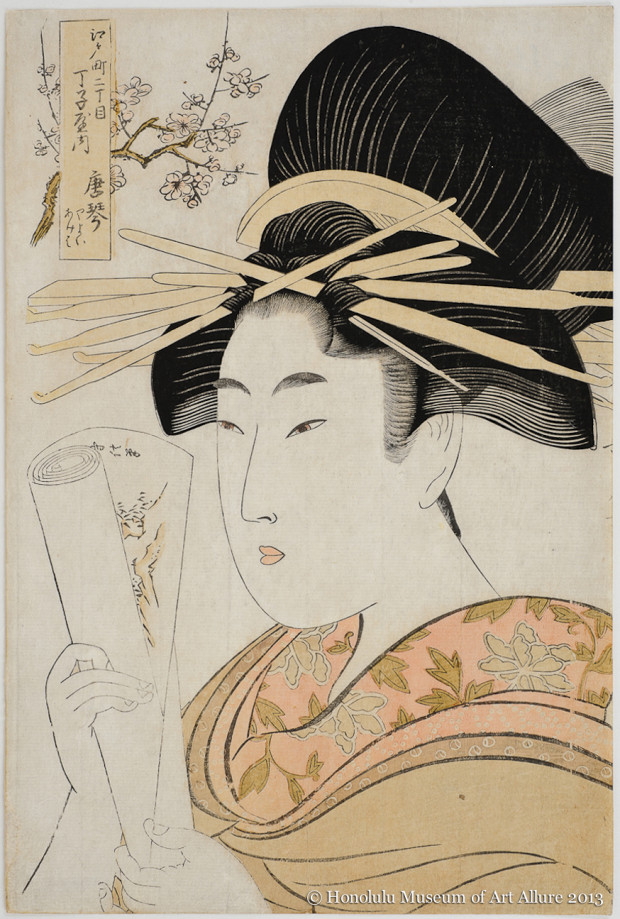 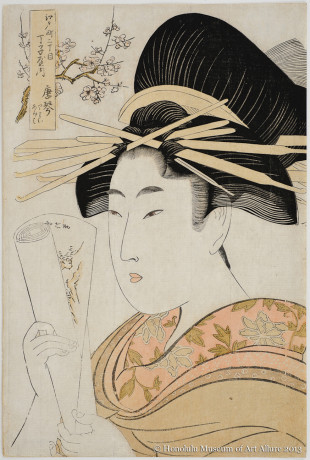 Kitagawa Utamaro (1753-1806)
Karagoto of the Chōjiya Brothel in Edo-chō Nichōme,
from the series A Comparison of Courtesan Flowers
Japan, Edo period, 1801
Woodblock print; ink and color on paper
Gift of James A. Michener, 1959
Honolulu Museum of Art
(14539)

While this print does not bear Utamaro’s signature, it is from the same series as his depiction of Hanōgi also in this section, and confidently can be attributed to him on this basis. Both prints reveal the full maturation of the artist’s innovative ōkubi-e style (which by this point had revolutionized ukiyo-e, and was widely used for both beauties and Kabuki actors), with a careful balance of fine details set against broad, flat planes, and meticulously carved lines for the hair, eyebrows, face and hands contrasted with fluid, sweeping undulations for the robes.

Karagoto was not the most famous of Chōjiya’s courtesans (an honor reserved for the Hinazuru lineage), but Utamaro’s depiction of her here stands out as one of his finest designs in this series. She is shown holding a painting with the signature “Morinobu,” indicating that it is by the renowned early Edo artist Kanō Tan’yū (1602-1674). While any high-ranking courtesan would be expected to have an appreciation for the arts, such a work by a major artist would have been a treasured antiquity, and suggests more than a casual level of connoisseurship on Karagoto’s part.