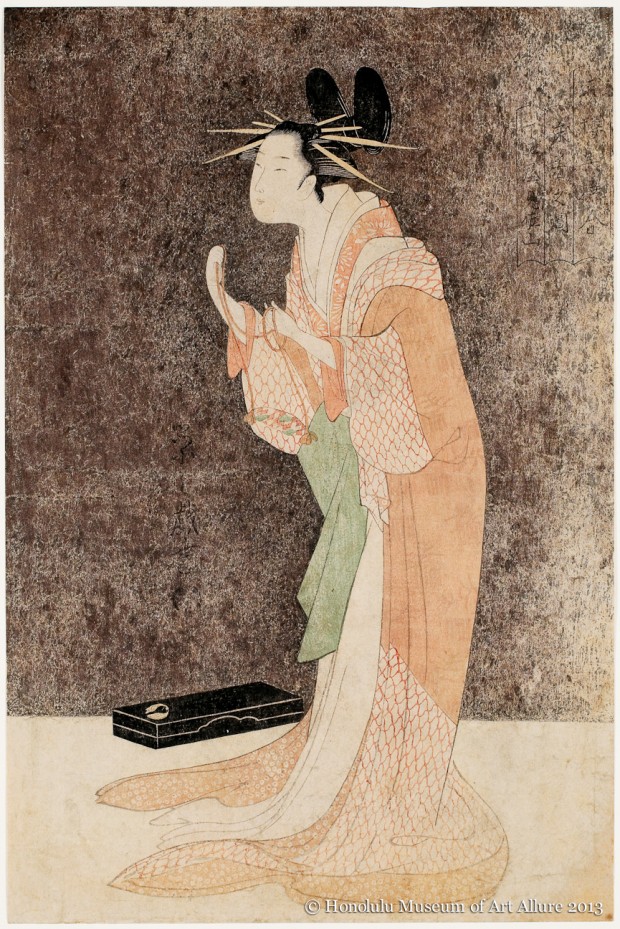 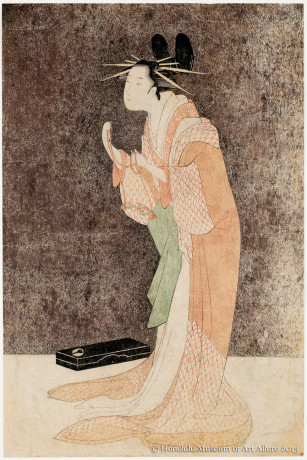 Chōbunsai Eishi (1756-1829)
Misayama of the Chōjiya Brothel in Her Dressing Room,
from the series Beauties in the Pleasure Quarters

Eishi was one of Utamaro’s principal rivals during the 1790s, developing a distinct style that was carried on by a number of students (including Eisui, whose Somenosuke of the Matsubaya Brothel also is in this exhibition). Both Eishi’s and Utamaro’s depictions of beauties grew out of the innovations of Kiyonaga in the preceding decade, and Eishi’s figural treatment of this subject bears many similarities to Utamaro’s work from the same time (compare, for example, with the two prints from Utamaro’s series Twelve Hours in the Yoshiwara). However, while Utamaro ultimately became best known for his bust portraits (ōkubi-e), which focused particularly on the face, Eishi continued to develop full-length portraits, with the body becoming increasingly elongated to the extreme proportions seen here.

Misayama is shown removing a sachet as she prepares for bed, its lacquered box on the ground to the right. The print exists in two variants; the present version, with an expensive dark mica background to indicate the evening setting, is the earliest, while a latter version (printed from different blocks) has a lighter background. One of Eishi’s most representative designs, its exceptional rarity makes this one of the most important prints in the museum’s collection.